Framing a wall correctly is essential to good structural design, but it can also be fun. At the end of a long day of building and erecting walls, you get to see the fruits of your labor standing tall before your eyes. The goal in this section is to provide you with the basic information you will need to begin framing a wall that is typically used in residential construction. 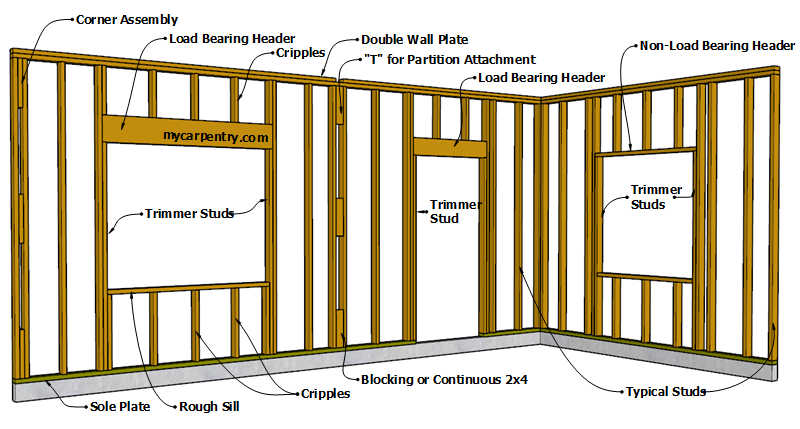 The diagram above shows two adjacent walls. The one on the left, with headers over the door and window, is load bearing because it is designed to carry the weight of the roof plus the weight of the ceiling (not shown). The connecting wall on the right is a non-load bearing wall because it is not carrying any load from the framing above. This wall is parallel to the direction of the joists and rafters and does not require a structural header over the window opening.

If you are planning to build walls inside of an existing structure, such as a basement, for example, where the loads are already supported by existing structure, you can omit the double top plate on the new wall and place studs up to 24" apart. Load bearing walls typically have studs placed closer together (16" apart), and require a double-top plate. 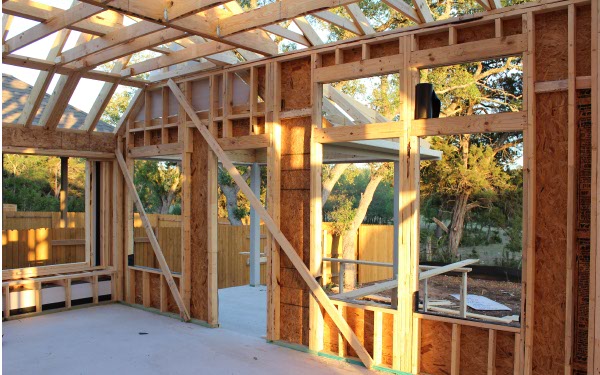 There is a lot happening in the picture above. Both of the adjacent walls are load bearing because they are both carrying weight of the ceiling and roof. There are headers above the two transom windows as well as the door and standard windows. The wall is braced on the inside with 2x4s to keep it plumb, until the OSB (Oriented Strand Board) installation can be completed.

Laying out the Top and Bottom Plates of a Wall

Select two straight 2x4s to use for the top and bottom plates; they must be long enough to build the complete section of wall being constructed. Position the two plates on a flat surface so that the ends line up. Pull a tape measure from one end and make a mark at 16". This will be the center of your second stud. Make another mark at 15 1/4" (shown in red). This will be the location of the left edge of the second stud. From this mark, make a mark every 16" and draw a line across both plates. Continue this 16" layout until you reach the end of the two wall plates.

Framing a Wall - Laying out the Top and Bottom Plates

When you are laying out your studs, keep in mind the size of the materials that will be covering the wall. Typically, drywall, plywood, and exterior sheathing, come in 4' x 8' sheets. This is one reason why 16" and 24" stud spacing work well for wall framing. In the diagram above, a piece of 48" wide sheathing, held flush at the end of the wall, will break in the middle of a stud. This is the reason for making the first layout 15 1/4".

Wall Framing for Doors and Windows

In addition to common studs, most walls have windows, doors, "T"s, and corners, etc., located at specific positions along the wall. For these, you will need to add the additional framing members to your plate layout.

The diagram above shows the plate layout, for the highlighted section of wall in the diagram below. Notice that, despite the location of windows, doors, and other framing elements, the 16" spacing between studs is maintained. Cripples are used to maintain the 16" layout, where full-length studs cannot be used.

Trimmer studs, also called Jack studs, support the weight of the headers installed over openings in a wall, and also serve as the two sides of a rough opening. 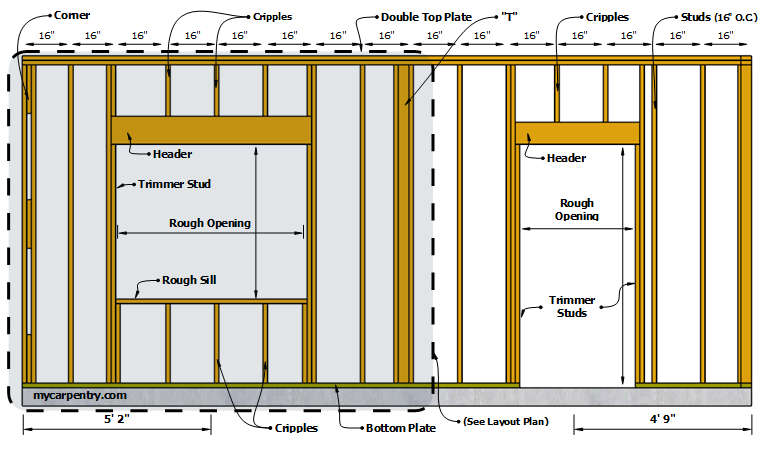 The span and size of a header is based on the amount of load that it will carry (ceiling, roof, snow, etc.). Typically, headers of doors and windows are constructed from two pieces of properly sized 2x material with 1/2" plywood spacer(s) sandwiched between them (see below). Check out the International Residential Code (IRC) for the latest Header Span Tables. 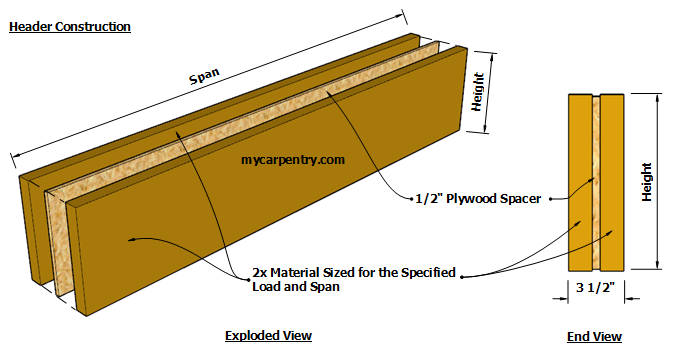 When framing a wall, some builders use 2x12s on all window and door headers, regardless of the span. The extra wood ("meat", as some would call it) behind the wall can serve as blocking to support various window treatments.

When you are connecting a partition wall to another wall, the proper framing must be in place. The two designs below are each acceptable methods. The framing on the left could be easily built from scrap material, and doesn't require two additional full-length studs, thus saving costs. 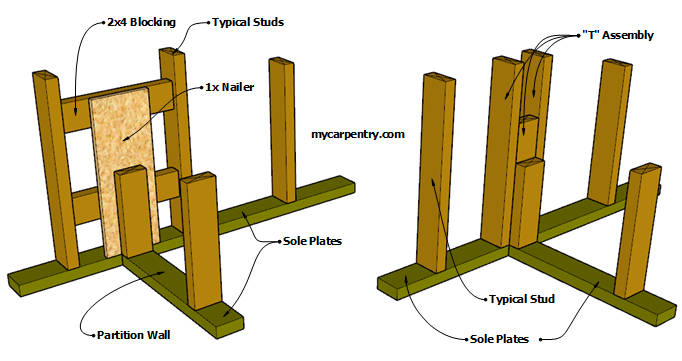 The blocking used, in the framing on the right, commonly called a "T", could also make use of scrap material in the center section. Though the "T" style framing uses two more studs than the design on the left, it is easier to mass-produce. If you have lots of connection points on your project, the "T" might be the faster way to go.

The diagram below shows two methods for framing corners. The design on the left, while saving slightly on the amount of materials, is less common than the corner framing on the right.

I have used the corner framing on the right, many times. Like the "T"s, they are easy to assemble and can make use of scrap material in the center.

After erecting the walls, add a double top plate. The double plate on walls helps carry the weight (between studs) of the ceiling, floor, or roof framing above it. It is also used to tie the walls together. 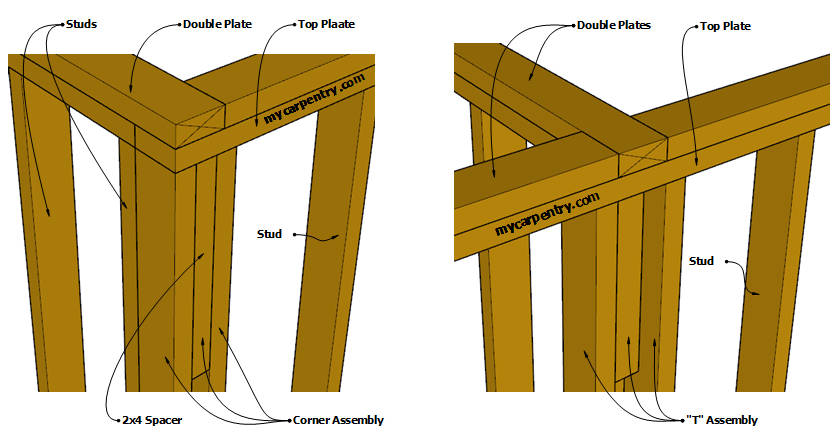 Leave framing a wall and explore the other framing carpentry pages.

Leave framing a wall and visit the mycarpentry home page.