Place the boxes where the cups are 21 feet apart.  To determine who will pitch first, each player will toss one washer to the opposite cup.  Whoever gets closest to the cup starts the game.  This is called the diddle.

Player A will toss their four washers, one at a time, to the opposite box followed by player B.  The person or team who scored last throws first.  Scoring is determined after both players/teams have tossed all of their washers.

Only one player/team may score per round, but only scores points for all washers that are closer than their opponents.  For example, if player A has 1 washer inside the box and player B has 3 washers inside the box, player B scores 2 points. 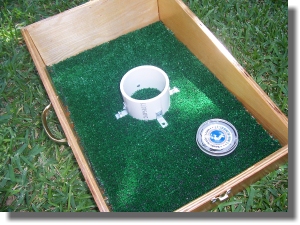